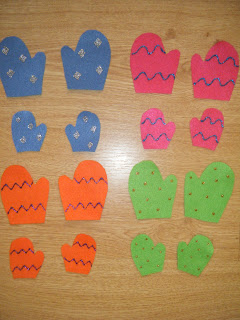 It's getting colder outside...this is a great felt activity to bring to group circle time or small group activities with young children:

Matching activities are a great tool for teaching color, size, shape and design to young children. In addition, matching experiences allow children to participate themselves by bringing a felt piece to the felt board at a circle time or by matching the mittens themselves at a classroom station. With felt, the children can feel the softness of the material, and the fabric is very durable for those little hands. Try making two sizes of mittens with the same colors. This activity can be made to equal the amount of children in a group setting, so that everyone can have one mitten in their hands to bring to a flannel board. It is also helpful to use as a circle time transition .

Songs to sing with this activity:

Warm, warm, warm and dry
Mittens feel so nice
So grab a pair in chilly air
Or in the snow and ice.

Posted by Christine at Thursday, November 21, 2019 No comments: Links to this post

At the Preschool I currently work at, we  just recently finished a three week Space Interest! For some reason, I did not have any space felt themed stories which gave me an opportunity to start making some new felts. The following is my favourite: Five Little Astronauts 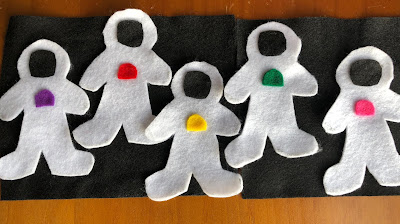 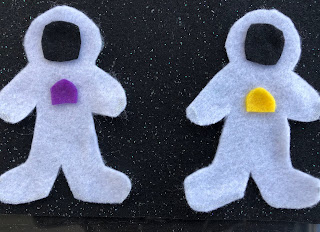 Then whoosh went the rocket ship into the night
And the five little astronauts zoomed out of sight!

Posted by Christine at Saturday, March 16, 2019 No comments: Links to this post